Bill Hicks was arguably the most influential stand-up comedian of the last 30 years. He was funny, out of hand, impossible to ignore and genuinely disturbing. His work has inspired Michael Moore, Mark Thomas and Robert Newman among others. The trade paperback published in February 2003 was the first collected work and included major stand-up routines, diary, notebook and letters extracts, plus his final writings, most previously unpublished. This smaller format paperback has extra material discovered subsequently. 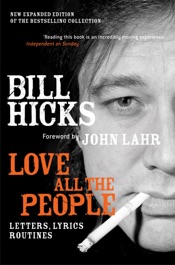