One of the most accomplished writers and directors of classic Hollywood, Billy Wilder (1906--2002) directed numerous acclaimed films, including Sunset Boulevard (1950), Sabrina (1954), The Seven Year Itch (1955), Witness for the Prosecution (1957), and Some Like It Hot (1959). Featuring Gene D. Phillips's unique, in-depth critical approach, Some Like It Wilder: The Life and Controversial Films of Billy Wilder provides a groundbreaking overview of a filmmaking icon. Wilder began his career as a screenwriter in Berlin but, because of his Jewish heritage, sought refuge in America when Germany came under Nazi control. Making fast connections in Hollywood, Wilder immediately made the jump from screenwriter to director. His classic films Five Graves to Cairo (1943), Double Indemnity (1945), and The Lost Weekend (1945) earned Academy Awards for best picture, director, and screenplay. During the 1960s, Wilder continued to direct and produce controversial comedies, including Kiss Me, Stupid (1964) and The Apartment (1960), which won Oscars for best picture and director. This definitive biography reveals that Wilder was, and remains, one of the most influential directors in filmmaking. 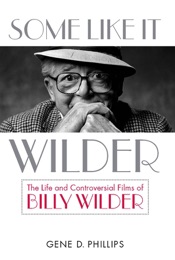