*Introductory Material
*Linked TOC
*Linked Glossary
The Defense of Duffer’s Drift is one of the most important works ever written on small unit tactics and is required reading for junior officers in military organizations around the world. It was written by Major General Sir Ernest Dunlop Swinton in 1904 when Swinton was a Captain. It details a fictional encounter in the Boer War. The book is narrated by Lieutenant Backsight Forethought (BF) who has been left in command of 50 men to defend a ford in the river. BF has a series of dreams in which his force is defeated by the Boers. After each dream, BF analyzes his performance and determines lessons learned. By the final dream, his force is successful in holding out until relieved. The lessons BF learned are the timeless lessons of small unit tactics and are as valuable today as they were at the turn of the century. The prose are simple and powerful. This book is essential reading for soldiers and students of tactics or military history. 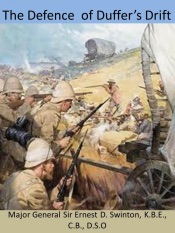