From bestselling author Martha Grimes, Detective Chief Inspector Richard Jury is back on the case in an installment in the Richard Jury Mystery series.

Long Piddleton had always been wary of newcomers. But the quiet town was stunned when the first stranger was found dead, upended in a butt of ale in the cellar of the Men with a Load of Mischief. Then the second body appeared, swinging in place of the mechanical man above the door of the Jack and Hammer.

Suddenly Long Piddleton had good reason to be wary of everyone! Its cozy pubs and inns with their polished pewter and blazing hearths had become scenes of the most bizarre crimes. Who were the victims? And who was the murderer? A stranger? A maniac? Or the disarmingly friendly man next door? 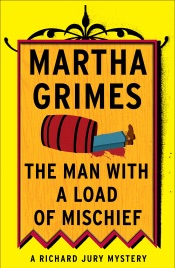