“The definitive book of the 1970s Pittsburgh Steelers” (Scott Brown, ESPN), Their Life’s Work is a triumphant yet intimate literary sports book that—through exquisite reportage, love, and honesty—tells the full story of the best team to ever play the game.

The Pittsburgh Steelers of the 1970s won an unprecedented and unmatched four Super Bowls in six years. A dozen of those Steelers players, coaches, and executives have been inducted into the Hall of Fame, and three decades later their names echo in popular memory: “Mean” Joe Greene, Terry Bradshaw, Franco Harris, Mike Webster, Jack Lambert, Lynn Swann, and John Stallworth. In ways exhilarating and heartbreaking, they define not only the brotherhood of sports but those elements of the game that engage tens of millions of Americans: its artistry and its brutality.

Drawing on hundreds of interviews, Their Life’s Work is a richly textured story of a team and a sport, what the game gave these men, and what the game took. It gave fame, wealth, and, above all, a brotherhood of players, twelve of whom died before turning sixty. To a man, they said they’d do it again, all of it. They bared the soul of the game to Gary Pomerantz, and he captured it wondrously. “Here is a book as hard-hitting and powerful as the ‘Steel Curtain’ dynasty that Pomerantz depicts so deftly. It’s the NFL’s version of The Boys of Summer, with equal parts triumph and melancholy. Pomerantz’s writing is strong, straightforward, funny, sentimental, and blunt. It’s as working class and gritty as the men he writes about” (The Tampa Tribune, Top 10 Sports Books of the Year). 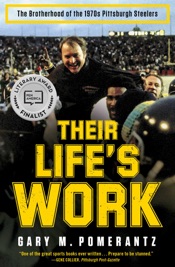