A revealing look inside the Russian Super League by its first Canadian coach.

Until now no Canadian had penetrated the coaching ranks of Russian hockey, but the year after the NHL lockout, Dave King became head coach of the Metallurg Magnitogorsk. From the beginning, King, Canada’s long-time national coach and former coach of both the Flames and Blue Jackets, realized he was in for an adventure. His first meeting with team officials in a Vienna hotel lobby included six fast-talking Russians and the “bag-man” — assistant general manager Oleg Kuprianov, who always carried a little black bag full of U.S. one hundred dollar bills.

The mission seemed simple enough: keep the old Soviet style combination play on offence, but improve the team’s defensive play — and win a Russian Super League Championship. Yet, as King’s diary of his time in Russia reveals, coaching an elite Russian team is anything but simple. King of Russia details the world of Russian hockey from the inside, intimately acquainting us with the lives of key players, owners, managers, and fans, while granting us a unique perspective on life in an industrial town in the new Russia. And introducing us to Evgeni Malkin, Magnitogorsk’s star and the NHL’s newest phenomenon. 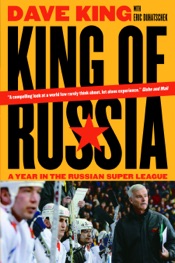