The first book in Don Brown's Actual Times series brings the start of the American Revolution to life.

A 26-year-old King George II found himself in financial turmoil after crushing the French, Austrians, and Spanish in battle. Luckily money was no object since he could easily get it back by raising taxes on his American colonies...but what King George didn't realize was the colonies were beginning to have a mind of their own and had started to set their sights on freedom.

The cast of characters includes those we know--the famous silversmith, turned messenger, Paul Revere--and many we haven't heard of like "Flinty Whittemore," a 78-year-old who fought off the British with a musket, two pistols, a sword, was bayoneted 14 times and still lived another 18 years to brag about it.

Detailed, yet accessible, Don Brown's award-winning nonfiction style brilliantly comes to life in Let It Begin Here, this fascinating account of the start of the Revolutionary War. 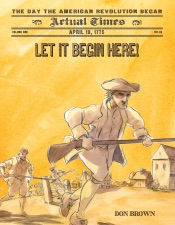