Just out of college seeking the adventure of his life and an opportunity to do good, Chris Starace joined the Peace Corps and was sent to Benin, West Africa for two years from 1995 to 1997. The challenge was great, and he was pushed to the limit in adapting to a starkly different culture while living on a meager $6 a day. He made many discoveries about himself, as well as an exotic land. Delving into the culture and creating strong relationships with the people led him to appreciate numerous aspects of Benin, while many outsiders are unable to see past its shortcomings. To Benin and Back recounts a variety of unique experiences from an insiders perspective such as living in a remote village, exploring the regional market, harrowing bush taxi rides, odd encounters with Voodoo, having a strange illness diagnosed by a very imaginative traditional healer, being stuck in a sandstorm in the Sahara desert, and humorous anecdotes about adapting to the Beninese culture, insects, snakes, domestic animals and children. When he returned to the United States, he was forced to reevaluate his own culture while dealing with severe reverse culture shock. Traveling back to Benin seven years later allowed him relive, reexamine and assess his long-term contribution. 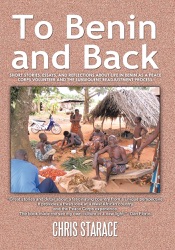