Fear: The public, media and politicians are told the planet is warming at an "accelerated" rate, that humans are the principal cause of this warming, and the results will be 'oblivion'. Fact: The planet hasn't warmed appreciably since 1998 (apart from the El Nino warming of 2014-15), humanity's role in warming is less than natural variation, and past warming has even been called 'paradise'. False Alarm is for readers who want to go beyond fears to the facts about global warming--all the facts, not just the scary 'facts' of the climate alarmists. 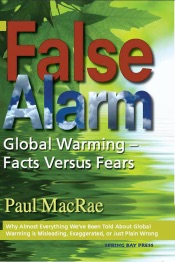