"A remarkable account of Britain's last stand in Kenya. This is imperial history at its very best."--John Hope Franklin
In "a gripping narrative that is all but impossible to put down" (Joseph C. Miller), Histories of the Hanged exposes the long-hidden colonial crimes of the British in Kenya. This groundbreaking work tells how the brutal war between the colonial government and the insurrectionist Mau Mau between 1952 and 1960 dominated the final bloody decade of imperialism in East Africa. Using extraordinary new evidence, David Anderson puts the colonial government on trial with eyewitness testimony from over 800 court cases and previously unseen archives. His research exonerates the Kikuyu rebels; hardly the terrorists they were thought to be; and reveals the British to be brutal aggressors in a "dirty war" that involved leaders at the highest ranks of the British government. This astonishing piece of scholarship portrays a teetering colonial empire in its final phase; employing whatever military and propaganda methods it could to preserve an order that could no longer hold. 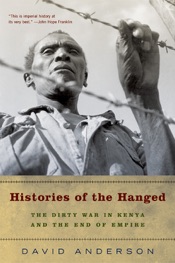