In 2010, NBC’s CEO Jeff Zucker, had it all worked out when he moved Jay Leno from behind the desk at The Tonight Show, and handed the reins over to Conan O'Brien. But his decision was a spectacular failure. Ratings plummeted, affiliates were enraged—and when Zucker tried to put everything back the way it was, that plan backfired as well.

No one is more uniquely suited to document the story of a late-night travesty than veteran media reporter and bestselling author, Bill Carter. In candid detail, he charts the vortex that sucked in not just Leno and O'Brien—but also Letterman, Stewart, Fallon, Kimmel, and Ferguson—as frantic agents and network executives tried to manage a tectonic shift in television’s most beloved institution. 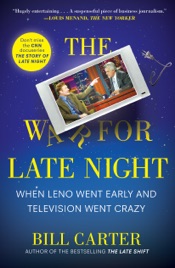