PFC Franklin Miller arrived in Vietnam in March 1966, and saw his first combat in a Reconnaissance Platoon. So began an odyssey that would make him into one of the most feared and respected men in the Special Forces elite, who made their own rules in the chaos of war.

In the exclusive world of the Military Assistance Command, Vietnam, Studies and Observation Group, Miller ran missions deep into enemy territory to gather intelligence, snatch prisoners, and to kill. Leading small bands of battle-hardened Montagnard and Meo tribesmen, he was fierce and fearless -- fighting army policy to stay in combat for six tours. On a top-secret mission in 1970, Miller and a handful of men, all critically injured, held off the NVA in an incredible Alamo-like stand -- for which he was awarded the Congressional Medal of Honor. When his time in Southeast Asia ended, he had also received the Silver Star, two Bronze Stars, an Air Medal, and six Purple Hearts. This is his incredible story. 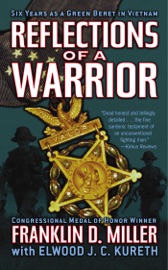