John McEnroe stunned the tennis elite when he came out of nowhere to make the Wimbledon semifinals at the age of eighteen—and just a few years later, he was ranked number one in the world. You Cannot Be Serious is McEnroe at his most personal, a no-holds-barred examination of Johnny Mac, the kid from Queens, and his “wild ride” through the world of professional tennis at a boom time when players were treated like rock stars. Here he candidly explores the roots of his famous on-court explosions; his ambivalence toward the sport that made him famous; his adventures (and misadventures) on the road; his views of colleagues from Connors to Borg to Lendl; his opinions of contemporary tennis—and his current roles as husband, father, senior tour player, and often-controversial commentator—in a “bracing new serve-and-volley autobiography” (The Boston Globe). 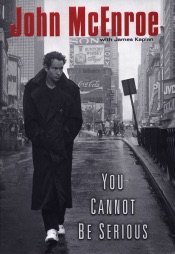