An inspiring look at the fight for the vote, by an award-winning author
Only 44 years ago in the U.S., Dr. Martin Luther King Jr. was leading a fight to win blacks the right to vote. Ground zero for the movement became Selma, Alabama.

Award-winning author Elizabeth Partridge leads you straight into the chaotic, passionate, and deadly three months of protests that culminated in the landmark march from Selma to Montgomery in 1965. Focusing on the courageous children who faced terrifying violence in order to march alongside King, this is an inspiring look at their fight for the vote. Stunningly emotional black-and-white photos accompany the text. 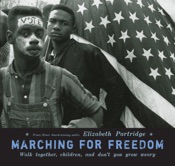