For the first time in a long time, life is good. I've got a smokin' hot motorcycle man as my fiancé, the best friends a woman could have, a couple of great kids, and things have been relatively quiet on the PI front.

You know what that means... the other shoe was bound to drop sooner or later...

Just when I was ready to settle down and plan the coolest wedding Greenswood has ever seen, the shit hit the fan, and hit it hard.

My friends are fighting, Cade's been out of town doing God knows what for the club, and my sweet little twins are turning into hair-pulling pre-teens with more drama than my old daytime soaps.

I feel like I'm being pulled in a million directions, and I've been going so crazy that Elin's swear jar is near to overflowing. I've been eating cupcakes like a woman possessed, and if I'm not careful, there's going to be a Cupcake Explosion... in my pants.

WARNING: THIS BOOK CONTAINS FOUL LANGUAGE, SEX, SOME VIOLENCE, AND SHENANIGANS. IF NONE OF THAT BOTHERS YOU, GRAB A CUPCAKE AND READ ON! 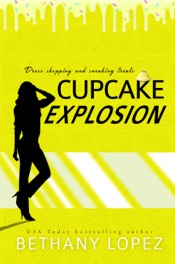