A Promise Land - A Comprehensive Summary his is a summary of A Promised Land by the 44th president of the United States, Barrack Obama, released in November 2020. About The Author Barrack Hussein Obama is the first US president of African descent and a member of the Democratic Party. He governed between the years 2009 and 2017, prior to which he had been the Illinois Senator.   Obama was born in 1961 to an African immigrant and an American mother with European roots. He grew up with an absentee father who had moved back to Africa after his parents divorced. He admits that his father's absence had shaped him more than the few moments in which he was present.  Obama is married to Michelle Obama, and together they have two daughters. Michelle has played a critical role in the making of the Obama that we know. This becomes even more evident in the book A Promised Land. President Obama has written two other books before this one; Dreams from My Father and The Audacity of Hope. About The Book The book is a memoir about his time in office; he started writing it shortly after his term ended. The book has 768 pages and has seven parts and twenty-seven chapters. President Obama chronicles his political journey and talks about the people and groups of people who helped him in this journey. He also writes about his thoughts, ideas, and principles concerning politics and personal life. Obama wrote this book in a conversational tone, luring the reader into being immersed in the story and the events he describes in the book. What is unique is Obama does not shy away from giving credit to all those who helped him through the years to make his journey possible, from his speechwriters to the strategists. This book seeks to summarize the book to give you an idea of what the book is about, chapter by chapter, so you can decide whether to get yourself a copy of the book for further reading. Let’s begin. Here is a Preview of What You Will Get: - A Full Book Summary - An Analysis - Fun quizzes - Quiz Answers - Etc Get a copy of this summary and learn about the book. 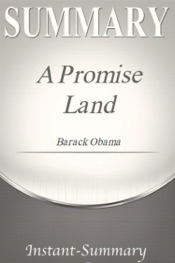