This version contains the two volumes and contains an active content that facilitates navigation by all parts of the document quickly and easily. Mein Kampf is an autobiographical manifesto by National Socialist leader Adolf Hitler, in which he outlines his political ideology and future plans for Germany. Volume 1 of Mein Kampf was published in 1925 and Volume 2 in 1926. The book was edited by Hitler's deputy Rudolf Hess. Hitler began dictating the book to Hess while imprisoned for what he considered to be "political crimes" following his failed Putsch in Munich in November 1923. Although Hitler received many visitors initially, he soon devoted himself entirely to the book. As he continued, Hitler realized that it would have to be a two-volume work, with the first volume scheduled for release in early 1925. In Mein Kampf, Hitler used the main thesis of "the Jewish peril", which posits a Jewish conspiracy to gain world leadership. The narrative describes the process by which he became increasingly antisemitic and militaristic, especially during his years in Vienna. He speaks of not having met a Jew until he arrived in Vienna, and that at first his attitude was liberal and tolerant. When he first encountered the anti-semitic press, he says, he dismissed it as unworthy of serious consideration. Later he accepted the same anti-semitic views, which became crucial in his program of national reconstruction of Germany. Mein Kampf has also been studied as a work on political theory. For example, Hitler announces his hatred of what he believed to be the world's two evils: Communism and Judaism. The new territory that Germany needed to obtain would properly nurture the "historic destiny" of the German people; this goal, which Hitler referred to as Lebensraum (living space), explains why Hitler aggressively expanded Germany eastward, specifically the invasions of Czechoslovakia and Poland, before he launched his attack against Russia. In Mein Kampf Hitler openly states that the future of Germany "has to lie in the acquisition of land in the East at the expense of Russia." During his work, Hitler blamed Germany's chief woes on the parliament of the Weimar Republic, the Jews, and Social Democrats, as well as Marxists, though he believed that Marxists, Social Democrats, and the parliament were all working for Jewish interests. He announced that he wanted to completely destroy the parliamentary system, believing it to be corrupt in principle, as those who reach power are inherent opportunists. 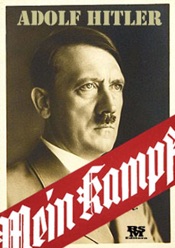 Free read eBooks online from Mein Kampf. Review Mein Kampf for free and without need to Registration. Read Mein Kampf PDF/e-Pub/kindle fire on your devices without any apps or contracts.