Wing Chun for the modern warrior is for the person seeking unadulterated self-defense. In the real world, where fights start suddenly, in areas with bad footing, with potential for multiple attackers, surrounded by hard surfaces rather than mats, ropes or a cage to keep you safe, you need Wing Chun. Too many martial systems have eschewed true self-defense and are totally reliant on the artificial safety mechanisms of their arena. Not understanding this can get you seriously hurt, even killed. Don’t make that mistake.

In Wing Chun for the Modern Warrior, therefore, you’ll see the brutal logic of Wing Chun at work. The chapter on self-defense application shows you how to defend yourself where and when it counts - where there’s no referee, gloves or rules and everything is on the line. This is a must read for anyone who believes that self-defense is a serious moral issue requiring sound logic and fistic wisdom. Who won’t like it?  Certainly competitive young men who mistake competition with sudden violence - who think showing they are “the better man” (through violence!) is the goal. The true self defender, though, understands no one ever wins a fight. They understand that their safety is the highest and only goal.

The second aspect of the book is to provide the must-have theories of Wing Chun and self-defense. Much confusion is avoided when the practitioner has a clear understanding of the simple, but key principles upon which Wing Chun is founded. To truly know how to do something we must know why and when.

In all, if you take self-defense seriously, and you’re confused as to the best unarmed option to pursue, Wing Chun is for you. A good Wing Chun man or woman doesn’t have to be in the prime of their life to make it work anymore than a home-defender with a shotgun has to be a Navy SEAL sniper.  Wing Chun is the shotgun of hand-to-hand systems. That’s the critical thing this book will give you - the skills and theories needed to defend yourself in the worst case scenario. 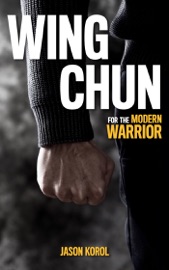