From the acclaimed author of A Fighter’s Heart comes an “entertaining and enlightening” look inside the mental game of mixed martial arts fighting (Dave Doyle, Yahoo! Sports).

In his acclaimed national bestseller, A Fighter’s Heart, Sam Sheridan took readers with him into the dangerous world of professional fighting. From a muay Thai bout in Bangkok to Iowa, where he fought the toughest mixed martial arts stars, Sheridan threw himself into a quest to understand how and why we fight.

In The Fighter’s Mind, Sheridan explores the mental discipline required of an elite fighter. In his training, Sheridan heard time and again (in Yogi Berra fashion) that “fighting is ninety percent mental, half the time.” But what does this mean, exactly?

To uncover the secrets of mental strength and success, Sheridan interviewed dozens of the world’s most fascinating and dangerous men. He spoke with celebrated trainers Freddie Roach and Greg Jackson; champion fighters Randy Couture, Frank Shamrock, and Marcelo Garcia; ultrarunner David Horton; chess prodigy (and the inspiration for Searching for Bobby Fischer) turned tai chi expert Josh Waitzkin; and the legendary wrestler Dan Gable, among others.

“Fantastic . . . One of the best MMA books I’ve ever read, and I’ve certainly read my fair share.” —Eric O’Brien, “Way of the Warrior,” ESPN radio
“You don’t have to care about fighting, or even know that MMA stands for mixed martial arts, to find insights into human behavior in Sam Sheridan’s The Fighter’s Mind.” —David M. Shribman, Bloomberg 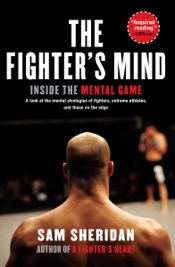