Liaozhai Zhiyi (Liaozhai; Chinese: 聊齋, or 聊齋誌異), called in English Strange Tales from a Chinese Studio is a collection of Classical Chinese stories by Pu Songling comprising close to five hundred "marvel tales" in the zhiguai and chuanqi styles which serve to implicitly criticise societal issues then. Dating back to the Qing dynasty, its earliest publication date is given as 1740. Since then, many of the critically lauded stories have been adapted for other media such as film and television.

The main characters of this book apparently are ghosts, foxes, immortals and demons, but the author focused on the everyday life of commoners. He used the supernatural and the unexplainable to illustrate his ideas of society and government. He criticized the corruption and injustice in society and sympathized with the poor.

The book is the first volume of Liaozhai. 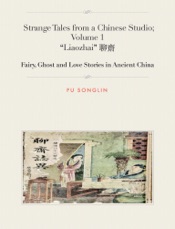