History is dramatic—and the renowned, award-winning authors Christopher Collier and James Lincoln Collier demonstrate this in a compelling series aimed at young readers. Covering American history from the founding of Jamestown through present day, these volumes explore far beyond the dates and events of a historical chronicle to present a moving illumination of the ideas, opinions, attitudes and tribulations that led to the birth of this great nation.
The French and Indian War: 1660-1763 covers much more than the few years during which the English and French fought over the division of the North American continent in one of the most neglected periods of American history. In this volume in The Drama of American History series, authors Christopher Collier and James Lincoln Collier trace how England’s other rivals for control of America were eliminated over this period until the only source of conflict left would be between the British and their own colonists. This series offers a fairly unique approach to American history by focusing on core content rather than a blizzard of names and dates, giving listeners a good sense of not only what happened, but why, as England eliminated its competition. 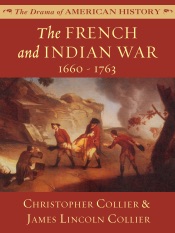