Latin America's Indigenous writers have long labored under the limits of colonialism, but in the late twentieth and twenty-first centuries, they have constructed a literary corpus that moves them beyond those parameters. Gloria E. Chacon considers the growing number of contemporary Indigenous writers who turn to Maya and Zapotec languages alongside Spanish translations of their work to challenge the tyranny of monolingualism and cultural homogeneity. Chacon argues that these Maya and Zapotec authors reconstruct an Indigenous literary tradition rooted in an Indigenous cosmolectics, a philosophy originally grounded in pre-Columbian sacred conceptions of the cosmos, time, and place, and now expressed in creative writings. More specifically, she attends to Maya and Zapotec literary and cultural forms by theorizing kab'awil as an Indigenous philosophy. Tackling the political and literary implications of this work, Chacon argues that Indigenous writers' use of familiar genres alongside Indigenous language, use of oral traditions, and new representations of selfhood and nation all create space for expressions of cultural and political autonomy.

Chacon recognizes that Indigenous writers draw from universal literary strategies but nevertheless argues that this literature is a vital center for reflecting on Indigenous ways of knowing and is a key artistic expression of decolonization. 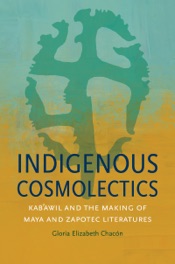