Daniel Calvisi brings his Story Maps screenwriting method to television as he breaks down the structure of the TV drama pilot, citing case studies from the most popular, ground-breaking series of recent years, including THE WALKING DEAD, GAME OF THRONES, HOUSE OF CARDS, TRUE DETECTIVE, BREAKING BAD, MR. ROBOT, SCANDAL and MAD MEN.

Story Maps: TV Drama offers the first beat sheet for television screenwriters ("Save the Cat" for TV). This is the structural template that aspiring and professional TV writers have been looking for. A clear, practical, step-by-step method to write a pilot that adheres to Hollywood standards.

How to write a TV pilot has never been easier. Writing a pilot begins here.

This book first introduces you to the key formats, genres and terminology of modern TV shows, then details the major signpost beats of a teleplay and the crucial characteristics that must be present in each act, using specific examples from our new "Golden Age of Television."

Story Maps: TV Drama has been endorsed by many INDUSTRY PROFESSIONALS in Hollywood, including:

"Story Maps: TV Drama is a handy, practical guide that walks writers through the process of creating a compelling TV drama. Using examples from some of the most respected shows on television, writers will learn to master the form from outline to Fade Out. I wish I'd had this book when I was first starting out!"
— Hilary Weisman Graham, Writer, Bones (Fox), Orange is the New Black (Netflix)

"This book blows all others out of the water! "
— Larry Reitzer, Writer, Melissa & Joey, Just Shoot Me!, Ugly Betty

"I've worked in film and television for years and I can say for certain that there is nothing else like Calvisi's book anywhere out there. His system is truly unique and breaks TV pilot structure down step-by-step, using very specific examples from some of the great pilots of recent years."
— Fritz Manger, Producer, A Deadly Adoption with Will Ferrell & Kristen Wiig

"I've turned to Calvisi for notes on several scripts in the past, and this new book is well-timed as the industry makes a huge shift toward television. This is a fantastic primer in developing a rock-solid one-hour TV pilot. I recommend this book to writers as the foundation in creating excellent story structure."
— Richard J. Bosner, Producer, Fruitvale Station, Other People, Mapplethorpe

" I have little doubt that by following Calvisi's guidelines...he can lead you to create a great pilot of your own!"
— Jenny Frankfurt, Literary Manager, High Street Management

"The bottom line is, don't learn the hard way like I did. Use Dan's book instead."
— Joe Nimziki, Director, The Howling, Outer Limits; Senior Executive, New Line Cinema, Sony Pictures

"Calvisi uses references that are current and offers clear, succinct advice. If you're thinking of writing a TV pilot, read this book first!"
— Christine Conradt, Writer/Producer/Director with over 50 produced credits 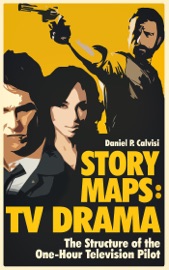