Evangelical Protestant groups have dominated religious life in the South since the early nineteenth century. Even as the conservative Protestantism typically associated with the South has risen in social and political prominence throughout the United States in recent decades, however, religious culture in the South itself has grown increasingly diverse. The region has seen a surge of immigration from other parts of the United States as well as from Latin America, Asia, and the Middle East, bringing increased visibility to Catholicism, Islam, and Asian religions in the once solidly Protestant Christian South.

In this volume of The New Encyclopedia of Southern Culture, contributors have revised entries from the original Encyclopedia on topics ranging from religious broadcasting to snake handling and added new entries on such topics as Asian religions, Latino religion, New Age religion, Islam, Native American religion, and social activism. With the contributions of more than 60 authorities in the field--including Paul Harvey, Loyal Jones, Wayne Flynt, and Samuel F. Weber--this volume is an accessibly written, up-to-date reference to religious culture in the American South. 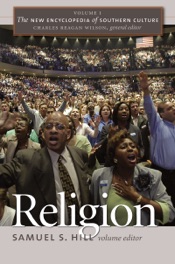