Kellan James is unwinding at Score when he spots the last person he’d ever expect to find in his favorite bar. Sara Connelly—ER nurse, do-gooder, charitable crusader, and frequent pain in his ass. Both grew up privileged in swanky Southampton, but that’s where the similarities end. Kellan’s made it his mission to seek out life’s pleasures; Sara gains pleasure from lecturing him on his lifestyle. Kellan would never date someone like her. Ever.

But when Kellan discovers Sara’s been stood-up by an online date, something fierce and protective awakens inside of him. Typically, Kellan would enjoy teasing the jilted Sara, but something in her face sends him over to her table with a plan. He encourages her to take a walk on the wild side, one weekend of sin, no holds barred.

She accepts, but it quickly becomes apparent that one night isn’t enough. As the pull between them grows stronger, Kellan discovers it’s a very dangerous thing to say never.

Each book in the Pulse series is a standalone story that can be enjoyed out of order.
Series Order:
Book #1 Engaging the Bachelor
Book #2 Seducing the Boss
Book #3 Claiming the Enemy
Book #4 Shocking the Medic 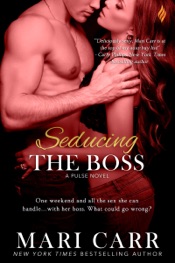