NEW YORK TIMES BESTSELLER
"This book is gold.”—Peter King
“Intense.”—San Francisco Chronicle
“Steve Young is a hero of mine, and his story is a source of inspiration for me. His perseverance, intelligence, and, most of all, grace under pressure NFL-style, make this book a fascinating read. Thanks, Steve, for sharing your story with one of your biggest fans!”—Tom Brady
“Steve was extraordinary in every facet of life. I’ve never read a football book with more honesty and integrity—it’s typical Steve. What a quarterback! What a man!” —Jim Nantz, CBS Sports
“All football fans know what a tremendously talented and successful quarterback Steve Young was in his NFL career. But what they don’t know about are the challenges and personal obstacles Steve had to overcome to make his dreams come true. This is a most exciting and compelling story.”—Roger Staubach

Steve Young produced some of the most memorable moments in NFL history. But his most impressive victories have been deeply personal ones that were won when no one was watching. His remarkably revealing memoir is the story of a Mormon boy with a 4.0 GPA, a photographic memory, and a severe case of separation anxiety.
As an eighth-string quarterback at Brigham Young University, it was doubtful that he would ever see any playing time. But Young became an All-American, finished second in the Heisman voting, and was the top draft choice out of college. Then, after signing the largest contract in sports history, anxiety nearly drove him to walk away from football completely.
In short, Young’s quest in life was always about grit. Now, he shares the experience of being inside his helmet while he faces down his toughest adversaries, both on and off the field. 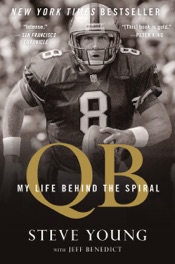 Free read eBooks online from QB. Review QB for free and without need to Registration. Read QB PDF/e-Pub/kindle fire on your devices without any apps or contracts.