"Touches on a dizzying array of subjects, including UV rays, inert gases, fossils, meteorites, microwaves, rainbows . . . Like many a good teacher, Berman uses humor to entertain his audience and liven things up." —Los Angeles Times

Bob Berman is motivated by a straightforward philosophy: everyone can understand science—and it's fun, too. In Strange Universe, he pokes into the bizarre and astonishingly true scientific facts that determine the world around us.

Geared to the nonscientist, Berman's original essays are filled with the trademark wit and cleverness that has earned him acclaim over many years for his columns in Astronomy and Discover magazines. He emphasizes curiosities of the natural world to which everyone can relate, and dishes on the little-known secrets about space and some of science's biggest blunders (including a very embarrassing moment from Buzz Aldrin's trip to the moon).

Fascinating to anyone interested in the wonders of our world and the cosmos beyond, Strange Universe will make you smile and think. 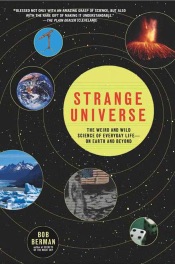